Thanks to Jen Vincent at TeachMentorTexts and Kellee Moye at Unleashing Readers for hosting this meme.

While listening to the radio this week, I learned about a poet whose work I was unfamiliar with. He is Bao Phi, and you can hear the feature on NPR’s Code Switch  here. I was really taken by the interview and his life story. He reminds me that we have still so much work to do when it comes to diversity in children’s literature (although he is not considered a children’s author). Grace Lin and the late, great Walter Dean Myers remind us to think of books as both “windows and mirrors” selecting books for our children. It’s an ongoing and worthy process, and we need to keep growing the conversation, with our teaching communities, and groups such as We Need Diverse Books.

Bao Phi does have a children’s book recently published, A Different Pond. 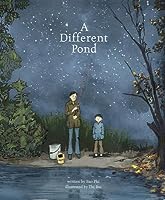 Here is the summary, from NPR:

As a young boy, Bao Phi awoke early, hours before his father’s long workday began, to fish on the shores of a small pond in Minneapolis. Unlike many other anglers, Bao and his father fished for food, not recreation. Between hope-filled casts, Bao’s father told him about a different pond in their homeland of Vietnam.

Bao Phi said he wrote this book, based on his own childhood, for his 7 year old daughter in response to a dearth of children’s literature about Asian Americans, in particular Asian Americans who are not East Asian. I love the way this book addresses important issues with honesty, love, and hope. I am so glad that I happened to turn on the radio at the exact time that his interview was aired, and I invite you to listen to and learn about Bao Phi!

I have been in education for all of my life, in one way or another. After teaching 5th grade at an urban public charter school, I have decided to return to the public schools and to literacy coaching K-5. I also teach and mentor preservice teachers.